In the month of October, many people are excited about the fall season and the upcoming holidays, showing colors of red, orange, and brown. Along with those traditional colors are shades of pink, to symbolize Breast Cancer Awareness Month (BCAM). For the entire month of October, the annual campaign increases awareness of breast cancer, supporting those who have been affected, around the world.

Being diagnosed is joining the sorority no one wants to join. But what I found is that there is a ‘sisterhood’ of us. And whoever is forced to join can tap into that experience of encouragement and support.

These words of encouragement that Becky Fisher, Global Director of Client Services (Oil & Gas), shared with us was something that many women can relate to when dealing with breast cancer — including several other notable women at BARE International.

Along with Becky, CEO Dale Bare, and Operations Manager Jennifer Eyler of BARE are survivors; they have offered to share their personal stories in honor of Breast Cancer Awareness month, showing support to all who are currently going or have gone through this journey.

While every experience is different, their journeys started similarly: discovery during an otherwise routine process.

“I had mammograms faithfully every year and had a ‘clear’ mammogram in September of 2012. Around the holidays that year, I found a lump during self-examination. I waited to see if it would go away, but it didn’t, so I called my family doctor,” said Becky.

Dale and Jen were both undergoing their annual mammograms when they received the news. Dale recalled, “I was told that the spot was so tiny that it could have been very easily missed had the radiologist not really studied the mammogram. I certainly had her to thank for my early detection, giving me the time to have the successful surgery and treatment I had.”

News of a breast cancer diagnosis have been life-changing to the BARE women. Jen explained, “[I] went from feeling like a healthy person to having a team of doctors and multiple regular appointments with each.

Shock is another common reaction to diagnosis as Becky recalled:

I remember feeling numb… and then scared.

“I was one who always thought of breast cancer as being something ‘in the family’,” remembered Dale. “I learned that is not true, as nobody in my family ever had any type of cancer.”

Friends, family, and co-workers at BARE were instantly ready to support these women however way they could. “I got through it with the support of friends and family, both personally and at BARE,” stated Jen.

“While I cried, my colleagues came and surrounded me and cried with me,” Becky shared. “From the very beginning of those dreaded words, ‘You do have breast cancer,’ I felt so supported through BARE.” Seeing how supportive the people around them were helped them fight against their cancer, which would continue for the rest of their battles and treatment.

The fight does not always end after treatment is completed. According to MedicineNet, “Breast cancer can come back as a local recurrence (in the treated breast or near the mastectomy scar) or as a distant recurrence somewhere else in the body.” The rate of recurrence is highest within the 3- to 5-year anniversary of completed treatment.

Jen recalled, “My five-year mark went by without a re-occurrence.  I was feeling confident that I was done with this. Then, at six years, I went in for my regular mammogram. I thought I was doing great, but cancer was found again. Although not a recurrence but a new cancer, which led to a unilateral mastectomy.”

She continued, “The surgery went smoothly but I had some complications due to my previous radiation. Ultimately, I healed and, seven months later, had reconstruction. This was again early stage and, therefore, decided not to do chemotherapy.”

Though a difficult process, they survived and share their victories with us, celebrating the strength and win of a fight no one wants to have. Becky shares a special moment of a post-treatment victory she experienced with a BARE evaluator and friend:

“Many treatments, surgeries, and hospitalizations later, I was in China on business.  I intentionally scheduled additional time so I could go to the Great Wall.  One of our evaluators, Sam from Australia, went with me.  I was determined to climb to the top of the wall. 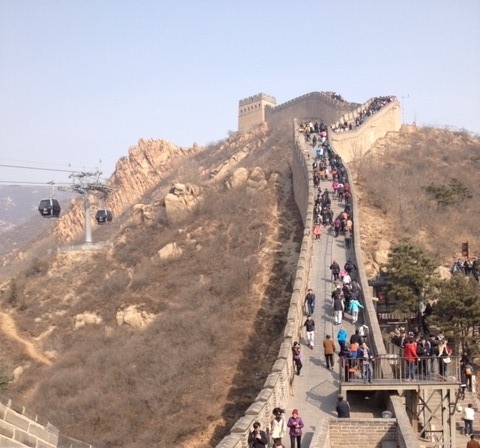 It was very challenging for me physically, but Sam cheered me on, and I made it.  It was a symbolic victory for me that I had overcome this obstacle in my life.  If I could climb the Great Wall of China, I could fight any battle!” 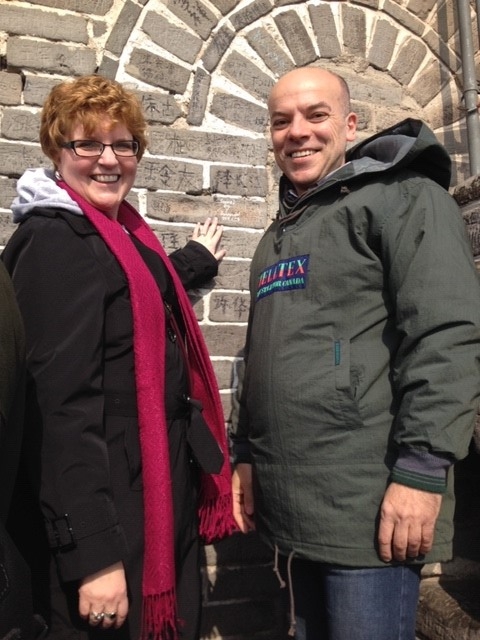 These women of BARE have shared words of awareness and encouragement for those who have dealt with this in their lives as well:

“If you know someone who needs a mammogram to encourage them to get it done,” urged Jen. “Both of my cancer occurrences were found during my yearly mammogram and were early stage.

If I had waited or skipped my mammogram, it would mean more aggressive treatments and – it is possible – I would not be here today.

[I am] so thankful for the technology that has been developed that saves lives.”

“As I’ve said: it’s the sorority no one wants to join,” stated Becky, “but when membership is put upon us, we rally and fight and cry together and support one another.”

Dale added, “If you or anyone you know, find themselves in this position, find people you can talk to. It is not healthy (and quite stressful) to keep all of the fears, questions, thoughts, etc. inside.

There are so many people who are out there, ready and willing to help… please let them.

Even though Breast Cancer Awareness Month is coming to an end, being able to celebrate these women’s victories, as well as others’ in the world, has shown how strong we can be and the fight continues. Becky concludes with the importance of early detection measures via self-examination and professional screening:

“Get those mammograms.  Do self-exams.  Listen to your body when you think something isn’t quite right. And if you ever find yourself in this sorority, your BARE family is here for you too.”

Want to join the discussion?
Feel free to contribute!

CLOSING THE GAP BETWEEN CUSTOMER EXPECTATION AND EXPERIENCE.

FLEXING YOUR PROFESSIONAL REPUTATION AS A MYSTERY EVALUATOR
Scroll to top

Fill out the form below to Access the Benchmark Studies